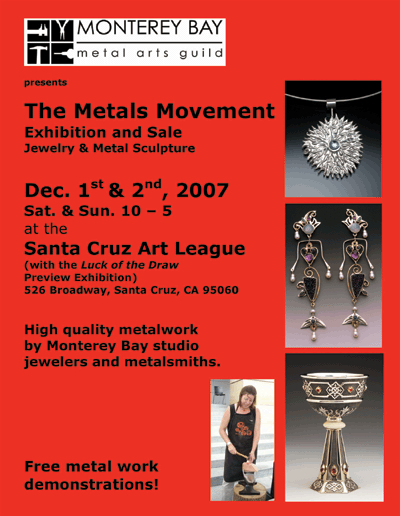 what:
Guild elections for 2007-2008 Board of Directors *who:
Theresa Lovering-Brown – Sabbatical slideshow and presentation
Cynthia Rand-Thompson – New Guild website walk-through

* If you are a member, and are unable to attend, use the Nominations ballot in the Member Area of the website.

(Room 615 is in the 600 / Chemistry Building, on the “hill” side of the building, not the ocean side. Check the campus map on the Cabrillo College website for building 600.)

During Dawn Nakanishi’s amazing sabbatical opening I was asked by one of our members about Yuma, “What is Yuma like?” I joke that what happens in Yuma stays in Yuma, but the truth for me is that the preparation, the actual experiences, and the in-between Yuma times… I still have a portion of the Yuma experience with me. It is hard to explain if you haven’t been there, but I will try:

This year there were several hundred attendees. This often ranges to upwards of 3-4 hundred – students, instructors, and enthusiasts. I can’t say everybody is alike, but the Yuma experience does transform everyone.

It starts on Thursday night at Lute’s Casino, this is a part not to be missed. So remember there is a time difference between California and Arizona. This seems to have screwed up every person at one time or another.

At Lute’s everyone has a chance to bring and exchange mostly for free, pins that have been made with other participants who bring pins to swap. You meet first year people, and Yuma veterans. Since this was Yuma’s 28th year-several folks have not missed a beat.

Metal presenters this year were Ken Bova, Kristen Beeler, and Kathleen Browne. Ken Bova taught us how to make a rivet hammer out of a chopstick, dental floss, and a 40 penny nail – he went MacGyver on us.

We got to see and hear about the 5-8 year gestation period that inspired Kristen Beeler’s 35 brooches and 6 necklaces that was a recent exhibition of her work. Kathleen Browne shared her intended and unintended voice expressed through her work and peoples reactions to her work.

Yuma is not just about the metals folk, the mud people, textiles, furniture, photo and painters were all represented there. Brush making for painters and potters was taught by Glenn Grishkoff. There is something for everyone. And the best part about it is that whether you are a participant in the saw, file and solder relay races, refereed by our own Lynda Watson, or shouting support for your team, everyone is approachable.

There are new and old friends to share time with. I recommend the comradeship and kindred spirits I have met at Yuma known to me as the “Yumarian Clan”. Pack your dancing shoes, and I will see you there.

We seek high-quality images of contemporary studio jewelry handmade by artists from around the globe. All suspended ornaments, from the symbolic and purposeful (amulets, talismans, and charms) to the purely decorative will be considered. Diverse materials, techniques, and styles desired.

To be released in the spring of 2008, this book aims to showcase a breathtaking collection that will inspire beginning and professional jewelers alike, as well as delight collectors, scholars, and jewelry enthusiasts.

To be considered for inclusion, please submit high-quality transparencies, slides, or digital images with entry forms. Artists whose work is selected will receive full acknowledgment within the book, a complimentary copy, and discounts on the purchase of additional books.

Artists retain copyright of their work. There is no entry fee. Entries must be postmarked by May 1, 2007. Guidelines & entry forms now available.

If any guild members are interested they should call Lynn Guenther.

MBMAG has an opportunity to work a booth in Santa Cruz at the Civic Auditorium on May 20th. It would be a great chance for public outreach… Maybe get a few new members?

We need volunteers to hang out for the day. We will set up a display of our work, it can be for sale…but only a sampling of what we do.

We can do some demos in the booth. Everyone will be responsible for there own supplies. If you have hand work that would be great. Let me know if anyone is interested. I have tables, covers and an EZ-UP. 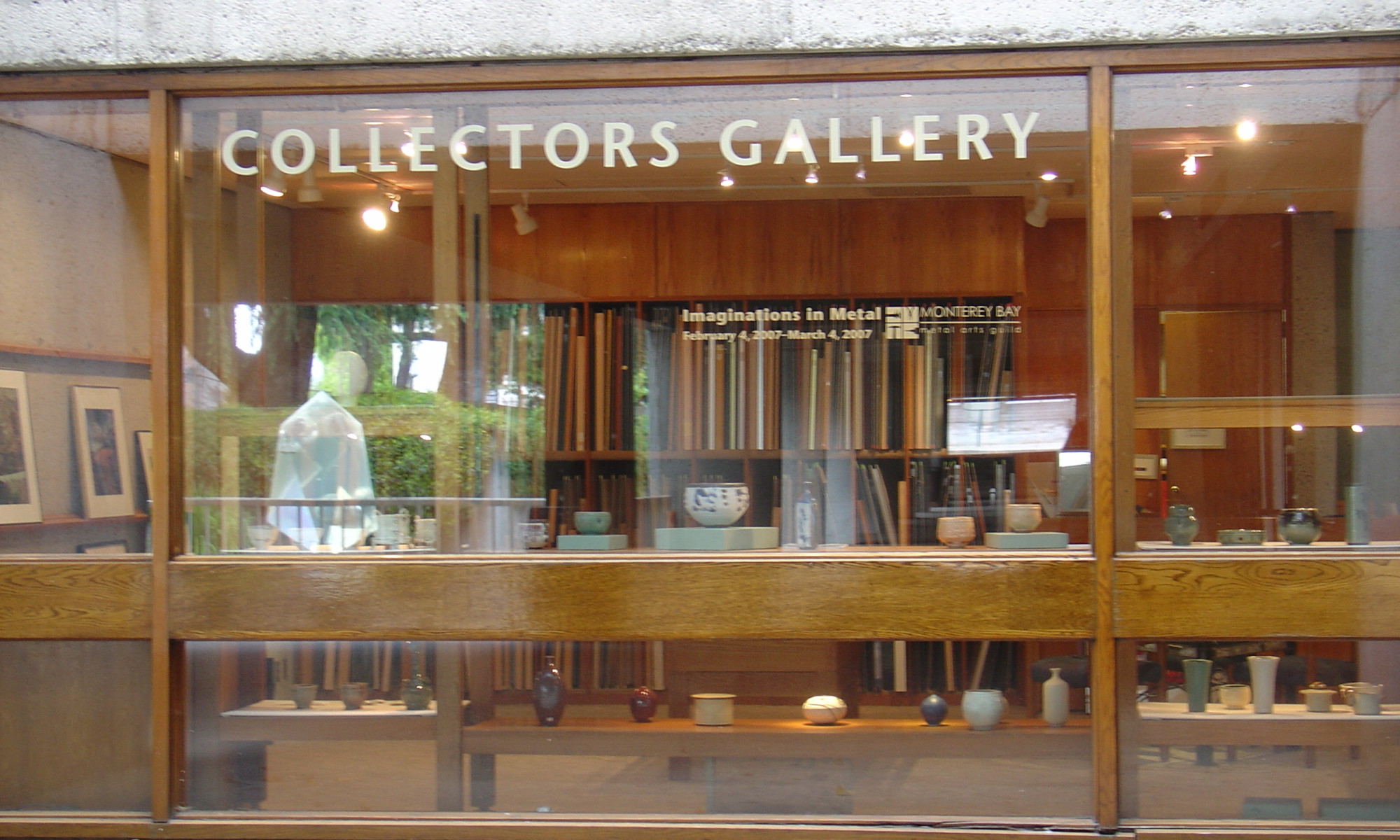 The Monterey Bay Metal Arts Guild exhibit “Imaginations in Metal” at The Collector’s Gallery of the Oakland Museum is a strong representation of the talents and versatility of the Guild membership. There are dramatic sculptural pieces, and an impressive variety of beautifully crafted jewelry. The show runs from Feb 4, 2007 – March 4, 2007.

Prior to the well attended opening reception, Rose Sellery, Wendy Ballen and Angela Gleason gave presentations in the lecture hall. We are fortunate to have such eloquent and inspiring Guild members. These three women, who spoke about their process and their influences, are the embodiment of the sharing and educational goals that are the foundation of the Guild Mission Statement.

The Monterey Bay Metal Arts Guild is a group of talented artists and this show at the Collector’s Gallery of the Oakland Museum represents that.

Ina Hohensee, Theresa Lovering Brown, and Barbara Banducci, along with many others, worked hard to organize this exhibit and the administrators of the Collector’s Gallery were very impressed with our professionalism. We have been invited to return.

In a few weeks, MBMAG members will have the opportunity to take a workshop from writer, educator, and master metal smith, Andy Cooperman, who is one of the top artists in our field. According to a recent article in Art Jewelry magazine (Jan. 2007), Andy Cooperman creates dense microcosms from metal, stone, and salvaged artifacts that invite viewers into the investigative process.

To paraphrase his web site, his visual vocabulary is grounded in science, inspired by the shapes of cells and organisms. He is known for using industrial and biological forms to make complex, multi-layered pieces with broken surfaces that create windows from layer to layer. His creative use of cold connections is an integral part of his designs.

Andy Cooperman is also a writer. His articles and essays on jewelry, jewelers and their processes have been published in Metalsmith Magazine, Ornament, and Lapidary Journal and he is a frequent and generous contributer to the Orchid forums on the Ganoksin website.

For more information about Andy Cooperman and his work, check out his fabulous website, coopermanjewelry.com. There are gorgeous pictures with detailed descriptions of each piece. It is a fascinating look at this artist’s thought processes. There is also a portion of the website that offers essays on issues that we all deal with as artists. He has clear and eloquent articles on procrastination, craftsmanship, and the jurying process. The website alone is an educational experience.

This workshop will be an excellent opportunity to learn from a multi-faceted artist who is known as a talented educator. His classes are full of information and insight and it is an honor for our guild to be able to host this workshop.

If anyone would like to work with me on the next couple of newsletters and then take over, I could really use the help. My husband will be retiring and our time on the West Coast will be gone before I know it. I would like this to be a smooth transition for this wonderful group of people.

Please shoot me an email at newsletter@MBMAG.org, and we’ll talk about what we can do together. All you need is a little computer experience and a kind heart.